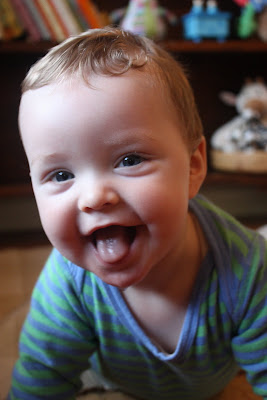 A three week trip home to Melbourne turns into five weeks.... plus a few weeks procrastination... and I now have a seven-month-old on my hands! What a different little boy to the one I last wrote about. My rolling, wriggling baby has positively turned to dynamite, crawling, exploring all over the house and loving every thrilling moment. How divine.
My Montessori sensibilities feared that such a long holiday away from home would disrupt Finlay's deep need for order and familiarity. It turns out he adapted far better than I could ever have hoped (and, possibly, better than I coped with the upheaval to our routine). He was certainly entertained by my friends and family and was showered with love and attention - what more could a baby want?!
What he did achieve while away from home was quite spectacular. That transition from tummy-time-push-ups to full planks occurred at Oma's house. The following week he figured out how to put his knees down for some pre-crawl rocking at Auntie Deb's. No 'prepared environment' there. Just space. And time. Oh, and cats - they're a great incentive to get mobile!
That was precisely the reminder I needed that the most important environment surrounding a child is the emotional one. Given the space and time, every baby will get up on their knees and move whenever they're ready.
However, now that we are home in our 'prepared environment' Finlay is visibly joyous to be able to explore freely all the spaces we had meticulously arranged many months ago. Most thrilling is his new ability to get out of bed all by himself. Thrilling for Finlay. Not so much for Brent and I... though I'm sure all will be easier when he figures out how to put himself back into bed all by himself. I'll be sure to let you know how that goes :)

This was one of Fin's early attempts at getting out of bed. He has now explored every possible way of getting out - head-first, backwards, sideways, diagonally - and is so fast that when I put him down in bed I barely have time to stand up before he's on the floor, squealing with delight.
Lots of adjustments have had to be made to child-proof the house in a hurry. Suddenly our magazines are being eaten and the power cords seem to have a strange power of attraction. Why oh why didn't I do this earlier?
One of the new developments I am really thrilled about is Fin's ability to move to his shelves and pull off his baskets and objects. It's as if he's been looking at those shelves his whole life, just waiting to finally get his hands on those things. My Montessori-heart sings. 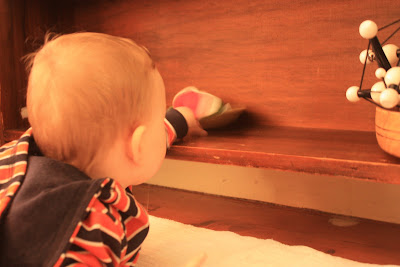