A Montessori Workshop in NZ

I must take a moment to write about a fantastic opportunity for anyone in Auckland or Wellington who is interested in learning more about Montessori philosophy: 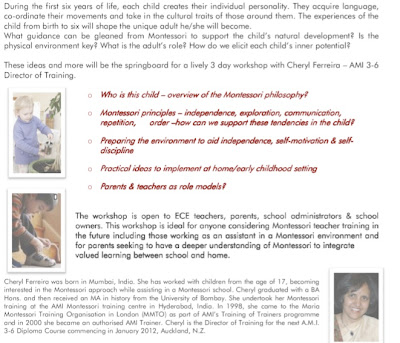 For more information and the registration form, please click here.
The Maria Montessori Education Foundation (MMEF) recently brought AMI 3-6 training to New Zealand for the very first time. In January next year they will begin their second 3-6 course here in Auckland. If you are interested in finding out more about the course, please visit http://www.mmef.org.nz/.
... And please don't hesitate to contact me if you would like to hear more about the amazing, transformative experience that AMI training offers! It truly is life-changing.
Posted by Cathy at 9:42 PM No comments: 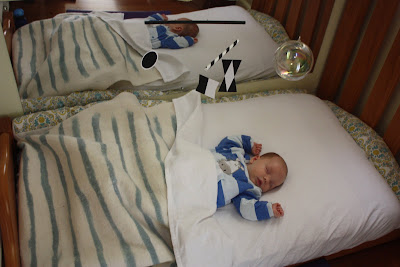 Sleeping like an angel... Finlay at 6 weeks old
I have been promising a floor-bed update for a long time! I was amazed at the response from my post back in december when Finlay finally started falling asleep in his room without feeding to sleep. It seems that most parents experience some level of anxiety over their children's sleep (or lack of!) and I have received many emails and questions regarding this topic. Recently, Neptune from the lovely blog Montessori Ici, asked:
'Do you keep the door shut after leaving your baby for nap or sleep time?'
The short answer:
Yes, I close the door until he falls asleep. After a while I quietly open the door so that he can come out independently when he wakes up.
The long answer:
We have been through so many phases since December that sometimes this works, other times it doesn't. If parenting has taught me anything, it is that nothing stays the same...
A few months ago Finlay suddenly went through a phase where he didn't want to be left in his room at bed-time. He would scream and cry when I left and I would be in, out, in, out, for what seemed like hours every night. In desperation, I started bringing him into our bed to go to sleep, which he LOVED, and since this worked so well, we kept doing it until it became his routine. Even his daytime naps were in our bed. He also started feeding to sleep once again. (I think this started again while he was sick and we never quite dropped the habit!)
I had known for a long time that Fin's cot-sized floor bed was not big enough but it wasn't until about six weeks ago that we finally got him a single (US twin) sized mattress. This has made all the difference and now, finally (again!), Finlay is sleeping in his own bed during day-time naps and for the first part of each night. We leave his door open so that when he wakes at night he can come down the hall into our bedroom independently.
Another factor that has complicated our sleeping scenario has been the presence of other children napping in Finlay's bedroom during the day. When we first started our home-daycare business Finlay was so excited to see another child in his room, that he would call out and try to crawl over to them (he was 10 months old at the time). That's when I started putting him into my bed to sleep during the day - it just made it all so much easier! Only recently has Fin been able to fall asleep in his room when other children are here, and only when I distract him by feeding him to sleep. He has also learned to come out of his room upon waking, without waking up the other children... a huge breakthrough!
So, would I say that my bed-time parenting choices have been led entirely by the Montessori philosophy?.... Well, no. Most of my parenting in this area has been led by instinct, necessity, and Finlay's strong personal choice. For a long time I wondered if I was doing the 'right' thing. I worried that I wasn't supporting Fin's independence by bringing him into bed with us and feeding him to sleep. Was I lazy? Was I trying hard enough?
One wonderful conversation set my mind at ease. I was fortunate enough to meet a visiting US AMI trainer who listened to my concerns and reminded me that if Finlay was showing signs of independence during the day (and my goodness, is this boy independent!) then by allowing him to choose where he sleeps at night I was, in fact, 'following the child'.
Meg over at 'At Home With Montessori' also speaks eloquently on this subject in her blog post, Montessori and Attachment Parenting. I love her quote: 'My opinion is that if the child is given the freedom of movement provided by a floor bed, and then chooses to leave that bed to sleep in a shared bed, that this is in fact reinforcing the autonomy and freedom of choice that we wish to cultivate in him through the provision of the floor bed.'
Thank you, Meg. You articulated this message so well and eased my conscience after many months of uncertainty.
Our next challenge will be to wean Finlay off night-time feeding. I'm really hoping that this will encourage him to sleep through the night because he still wakes at least 2-3 times each night wanting to feed back to sleep..... and I'm afraid I'm getting deliriously sleep deprived!
Ahhhhhh the joys! 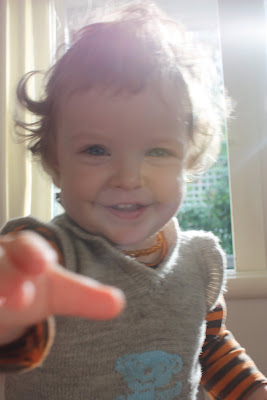 The cheeky monkey keeping us awake at night...!
Posted by Cathy at 10:18 PM 7 comments:

My my, it has been a very long time between drinks (well, posts!) here at A Montessori Home. It seems life got in the way this past month. Between Fin getting Measles (loooong story), Brent going away for three weeks (to play principal trumpet with the West Australian Symphony - how exciting!) and my mum coming to visit from Australia, there hasn't been much time to breathe, let alone blog. Happily, it feels like the storm is settling and life is getting back to normal. 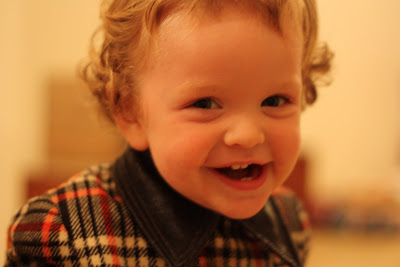 That cheeky grin is back after a nasty case of Measles
Amidst all the craziness, Finlay seems to have taken a huge leap in development. As he approaches 15 months, he is becoming a more and more active part of our daily house-work and over the past three weeks he has absolutely exploded into language! I'm so pleased that my mum (Fin's Oma) was here to witness all this - is anything sweeter than a child's first words?? 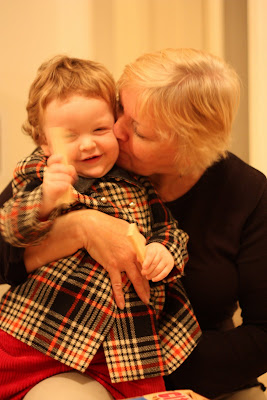 Quality time with Oma (showing off a jacket my brother wore over 35 years ago...!)
Fin has had a repertoire of words that he has been using for a long time ("Mum", "Daddy", "did it", "oh no", "oh dear", "uh oh", "OK"), but suddenly he has started wanting to name things and is repeating the words we say.
Now we have been hearing, "bye bye", "shoes", "boot", "chi" (cheers -which must, of course, be accompanied by a clinking of glasses and drinking water!), "chk, chk, chk" ("chook, chook, chook" - we have chickens in the backyard) "bir" (bird), "pane" (plane), "water", "b-b-rsh" (blueberries), "fsh" (fish), "more" and "ma" (Oma), with more added each day. He has been repeating "Bye, bye, ba-dee" all week and I have been trying to figure out what "ba-dee" means... then suddenly this evening he said "Bye bye, ev-ee-ba-dee" and I realised he was trying to say 'everybody'!
There are many ways we can support language development at home:
1. Naming items slowly and clearly.
2. Using beautiful, rich vocabulary rather than baby-talk.
3. Describing what you are doing, as you do it (e.g: "I'm wiping the table", "I'm washing your hair", "I'm pouring some water")
4. Describing what your child is doing (e.g: "You're touching the chair", "You're holding the cup", "You're rolling the ball")
5. Creating order in the home and through routines. Since the young brain is constantly being wired-up, we can help them create inner order by making the outer environment as orderly as possible. This will assist them to make sense of the many things they find in the world, and feel confident that they recognise objects along with the sounds that represent them.
It seems obvious to assist a child as they begin saying their first words, but we really need to be modeling beautiful, clear language right from the start (even before birth!). Young children are literally absorbing what they find in their environment, so let's give them the very best from the very beginning! 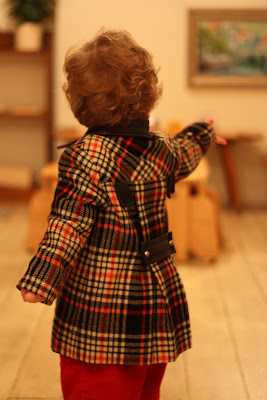 Now that he has the words, Fin can order us around... His favorite word right now is "more"!
Posted by Cathy at 1:44 PM 2 comments: