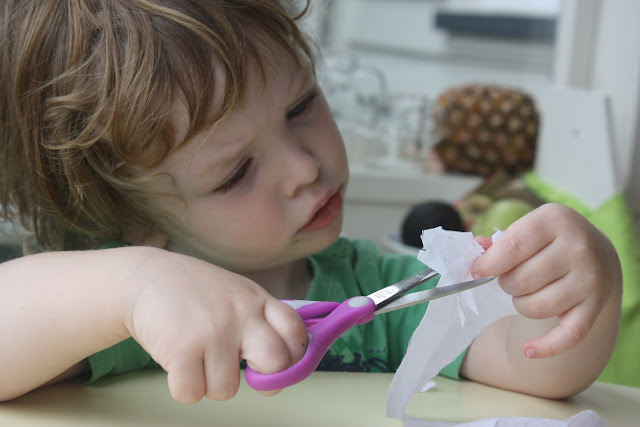 So many 'blog-able' moments have come and gone over the past few months, with no time to sit down and document them, but this series of photographs were too sweet not to share.

A few weeks before Finlay's 2nd birthday, I commented to my new co-teacher Carol that perhaps we would need some 'toddler' scissors for the few younger ones who were starting in our class (you know, the handle-free scissors that spring open by themselves?).  I had been observing Finlay with a little pair of plastic scissors which we had been using along with playdough, and so far it seemed beyond him to hold them in one hand....  there was a lot of two-handed opening and closing going on.

Carol's look of horror made me think twice.  We had already committed ourselves to putting only the most beautiful, functional, real objects in our environment - toddler scissors were not an option.  So I prepared myself for some tantrums, imagining Finlay wanting desperately to use the real scissors that were not yet suitable for him.

Simultaneously, I started doing a lot of cutting at home while preparing materials for the classroom... fabric, cardboard, paper... hours and hours of it.  And of course, Finlay insisted that he wanted to try them too.  He was so insistent that we took a special trip out to the shops to get him his own pair of scissors.  The moment we got home I gave him a brief presentation.... and he was off on a cutting frenzy!

Once he had spent hours and days cutting strips of paper into tiny snippets, he moved on to cutting fringes along the edges of larger pieces of paper, and then on to cutting fabric (just like Mummy).... 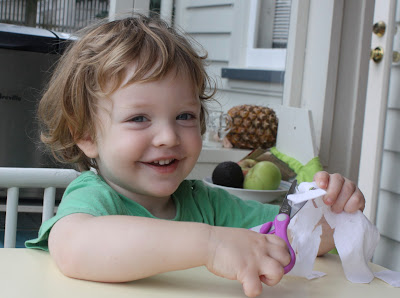 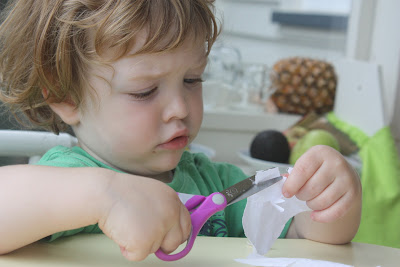 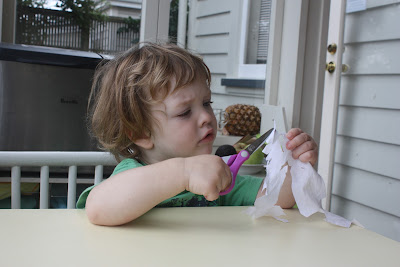 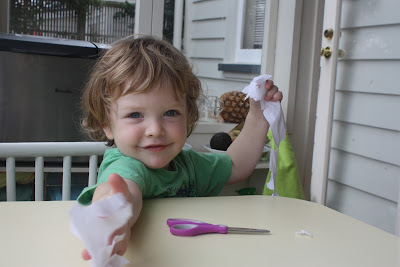 Another huge lesson was learned from this series of events.  I was sure that he was not ready for real scissors, and yet Finlay showed me not only that he was ready, but that it was precisely the activity to meet his inner developmental needs at that moment in time.  When repetition and concentration occur around a particular activity, you can be sure that it has just the right balance of challenge along with satisfaction.  Plus, a new skill has been learned.  This has really opened up a new opportunity for us both to work side-by-side, each concentrating on our own task.

Such a lovely way to spend our time together :)
Posted by Cathy at 3:42 PM 6 comments:

Big changes to our little world 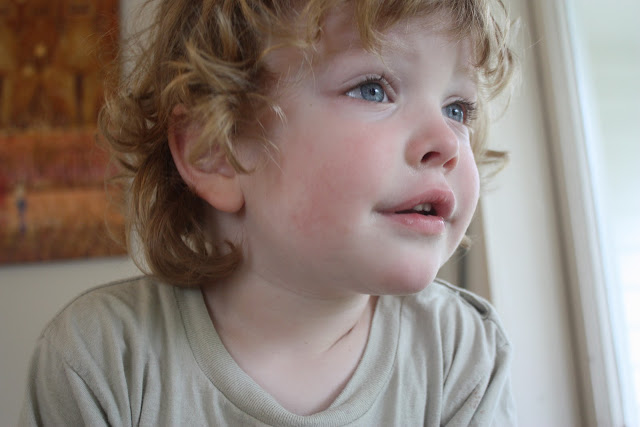 Has it really been three months?

Big changes have been underway in our little world.  Going back to work full-time has been a huge transition for all of us, but finally things are starting to settle and the new routine is feeling easier.  As I mentioned at the end of last year, we intended for Finlay to come along with me to preschool in the mornings, but we soon discovered that this was just not the right place for him at the moment.  Luckily we had the option of leaving him with a lovely nanny for the next few months until he's ready - a hard decision to begin with, but Finlay is showing very clearly that he is happy with the new arrangement so that has eased my guilt a lot.  I look forward to re-introducing him to our Montessori casa when he is truly ready and can fully appreciate and benefit from it.

That darling boy of mine turned two a few weeks ago.  What joy it is to listen as his language becomes more and more complex.  What fun it is to watch as his co-ordination allows him to be more and more independent.  And how exhausting it is to be with a two-year-old who can descend from that angel face (above) to this (below) in the blink of an eye! 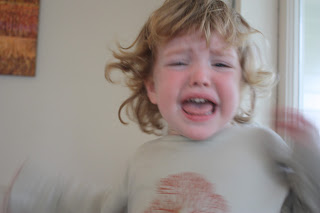 I know I have purposefully raised him in an environment which supports self-sufficiency, but my goodness it's difficult to keep up with his thirst for autonomy.   This determination may be challenging for the adults in his life right now, but I'm confident that this unstoppable desire for challenge will serve him well in the years to come.  Part of me wishes I were still home full time so I could allow him more time to do everything for himself... another part of me is thankful that we get to spend some time apart each day so I can recharge my patience-batteries and be at my best for him.  This is a constant challenge but such a great learning opportunity for me.

Here are a few pics from the past month as Fin entered his third year of life... what a big boy he is all of a sudden! 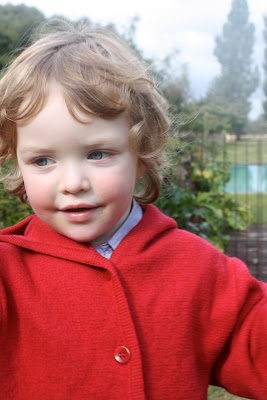 Meanwhile, I have been busy setting up our beautiful new Montessori environment and introducing our first children into the class.  Most of my spare time has been spent thrifting and sewing... 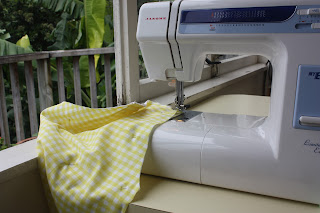 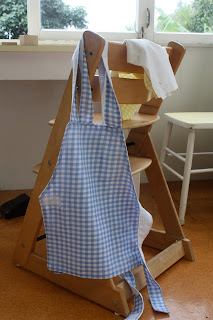 And there's still so much left to make!  Stay tuned for a little tour of our new space... I can't wait to share it with you.
Posted by Cathy at 11:05 PM 3 comments: