And now for Part 2 of our tour...
Last week I focused on the bedroom, and though I have big plans for the kitchen and bathroom for when Finlay gets a little older, right now the lounge is where he spends most of his waking hours so I'll now focus here.
The Lounge Room 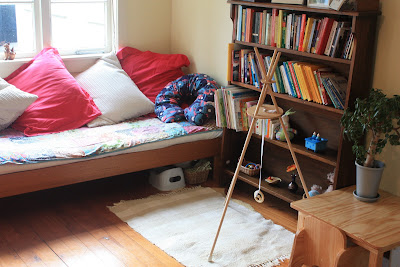 This photo shows half of our lounge, where Fin spends most of his time (for now, anyway!). On the floor we have a sheepskin and rug which I often cover with a towel to give Fin nappy-free time. Having a designated place for him on the floor allows him to develop his movements without the restraints of a bouncer or jolly-jumper. I was really happy to read Marianne Hermsen-Van Wanrooy's recommendation in Baby Moves (I've mentioned this book before - love it!) that babies should spend as much time on the floor as possible in order to develop muscle balance. It's always nice to read modern scientific publications which back up what Maria Montessori said 100 years ago - that children need freedom of movement from birth and that we do the child a huge disservice by restraining them in contraptions for our convenience. This wasn't meant to be a rant about freedom.... I'll move on! 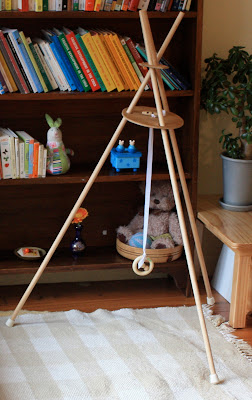 The wooden toy hanger was inspired by this teepee from the Michael Olaf Company. I love it's simplicity - such a lovely antidote to the fluorescent plastic baby gyms that you see everywhere. I didn't fancy spending around $150NZD (plus shipping) on one of these. Luckily, Brent's handy dad took one look at the photo and said, "I could make one of those...", disappeared into the shed and came back with this! At first we used it to hang mobiles on while Finlay was learning to focus and track objects, and later we hung items on elastic for him to bat, reach and grasp. By hanging one (beautiful) item at a time, we avoided overstimulating him, and allowed him the time and space to develop his grasping skills. Just this week we have taken the hanger away because he seems quite happy exploring objects while on his stomach, and can now roll to grasp something on the floor next to him. I was reluctant to take it away because I love it so much, but I just had to concede that it was not serving his needs anymore. We'll just have to put it in storage until the next baby comes along :) 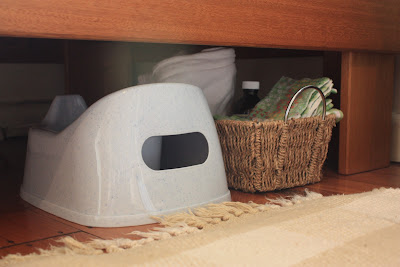 Tucked under our daybed is a little potty and a basket with spare underpants and cloths. We've been practicing Elimination Communication (EC) with Finlay since he was a few weeks old. Here is a great video explaining the hows and whys of EC. I haven't read any Montessori texts which recommend this practice, but it seems to fit in perfectly with the philosophy. I'll go into more depth about how it has worked for us in a later post. The reason for having the potty here is simply that it's practical for us, and I'm hoping that when he starts crawling, Fin will actually move toward the potty when he needs to use it. In time, I will gradually move the potty into the bathroom where it belongs and hopefully have a smooth transition to the toilet. 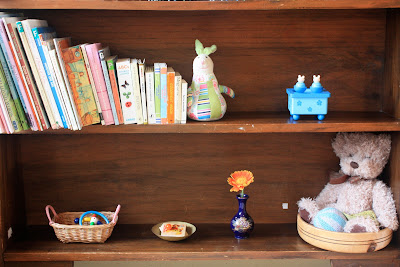 Before he arrived, we cleared the bottom two shelves on our bookshelf for Finlay's things. A few baskets with his current grasping objects, a flower in a vase (when we have fresh flowers in the house) and a teddy bear are at home on the bottom shelf. We have been given some really beautiful soft toys since Finlay was born, and it has been hard to reconcile the reality-based Montessori ideology with these traditional toys. My compromise has been to have one soft toy out at a time, rotating every few weeks, and to place it in a wooden tray so it has a 'home'. On the next shelf are Fin's books and a music box. When he starts exploring these shelves I'll store the books somewhere else, just leaving two or three out at a time so he is not overwhelmed, and so it is easy to restore order to the shelf. The music box might have to find a higher home as well. 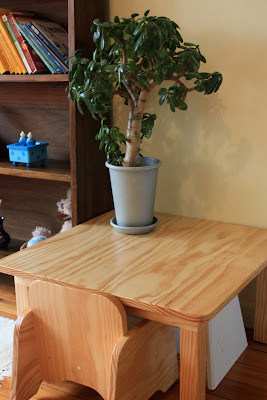 Lastly, we have Finlay's infant-sized chair and table. It took many months of searching to find a company in New Zealand who would make furniture at this size. Naturally Wood made this beautiful set and I couldn't be happier with the quality. When Finlay is sitting up comfortably he will eat his meals at this table, unless we are sitting down to a whole-family meal, in which case he will join us in his highchair at the dining table. I have a little white stool tucked under the table for me to sit on. Again, the purpose of the little table is to encourage independence and allow freedom of movement. As a bonus, it's absolutely adorable and a great talking point!
Needless to say, Finlay's things do take up a large percentage of this living space, but I do feel that it is important to include him in our family life from the very beginning. The fact that all the items are carefully chosen and beautiful (not plastic or ugly like many baby toys these days), means that rather than being an imposition on our space, Fin's objects blend in and actually add to the beauty of the room. Of course, I take great pleasure in arranging things 'just so'... the next challenge will be to maintain this beauty when Fin really gets moving.
Posted by Cathy at 11:05 PM