On his own two feet

Wasn't it just the other day I was marveling at how Finlay had finally gotten himself up on hands and knees?... Well, in all his excitement at being able to move around he joyfully discovered a new trick - standing up! And now that's all he wants to do. Anywhere, any time. Everywhere, all the time. Wherever there is something to pull himself up on, he's up.
It all started in the kitchen. For months now I had been wondering whether to invest in one of these pull-up bars, but alas I never got around to it (and I'm not sure where we would have put it anyway!). Last week while I was cooking in the kitchen, Fin followed me in there by himself for the first time. Being on the floor, he noticed the handle to the drawer under the oven. He experimented with getting one hand off the floor to reach for the handle... and then the other hand pulled him up to kneeling! Very pleased with himself indeed. From now on I'll have to be very careful to keep him out of the kitchen while the oven is on. 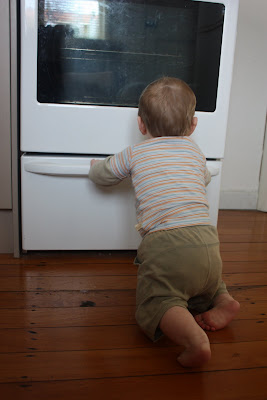 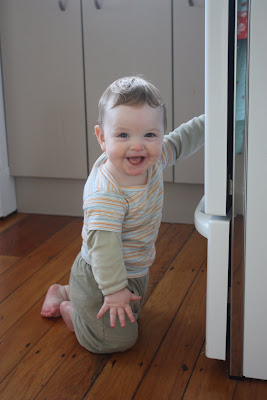 The very next morning I woke to Fin's face grinning at me from the side of the bed - he had pulled himself up to stand!
Since then he has been unstoppable, even while he's had a bad cold and must have been feeling quite miserable. The poor thing has been all snuffly, snot running down his face, and yet he's still determined to pull himself up on anything within reach. Most recently he's experimenting with letting go of one hand or lifting one foot at a time. Cruising is on it's way!
Now, if only he could figure out how to get back down again....
What is truly thrilling to watch is the intense concentration and repetition that is going on. In my 3-6 classroom I regularly observed children absorbed in their work, repeating again and again until they had perfected a new skill, but this is different. It seems that the younger a child is, the more forcefully their inner guide drives them forward and the more intensely they experience the joy that comes with that work. I hope that by refraining to interrupt his efforts and by patiently helping him up each time he tumbles down (only to get up and try again), he might be able to carry some of this joy and energy into his adulthood to come. 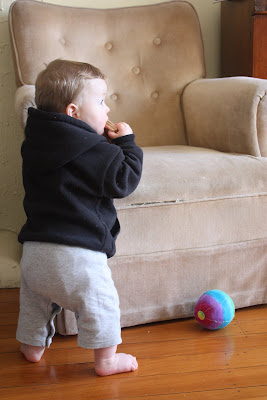 "A child who has become master of his acts through long and repeated exercises, and who has been encouraged by the pleasant and interesting activities in which he has been engaged, is a child filled with health and joy and remarkable for his calmness and discipline."
(Dr. Maria Montessori, 'The Discovery of the Child', Clio Press Ltd, 92)
Posted by Cathy at 10:30 AM