I thought it might be nice to give a bit of a tour of our home and explain the many ways we've been able to incorporate Montessori principles within a tiny space. I had quite a hard time finding inspiration from real homes while I was pregnant and setting up our house, so hopefully this will add to what little resources are available online to inspire new (and seasoned) parents in better preparing their homes for little people.
Before beginning, I think it's worth mentioning that we have purchased very few things new. Most of the furniture and objects which you'll see here were bought second-hand and it really is possible to set all these things up on a limited budget. Of course, if you do want to spend a bit more money there are some wonderful online sources for Montessori furniture and materials which I'll mention as well.
The bedroom 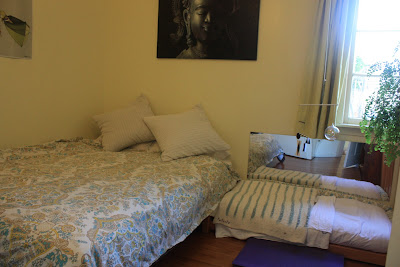 This is our cosy little bedroom in our 2-brm flat. If we had a spare room (the other room is basically storage right now!) we probably would have made up a separate bedroom for Finlay, but since space is tight, it just made sense to have him sleep with us. This has worked out really well because as all mothers know, getting up in the middle of the night is exhausting and it's much easier if baby is right there. Also, for the first few weeks, Finlay actually slept with us in our bed. This is a big Montessori no-no (because the aim is to help babies sleep independently), but we all loved it, bonding was enhanced and I truly believe that this time in our bed helped build his sense of safety so that after three weeks he was happy to sleep in his own bed (and has done ever since, except our afternoon naps which we still often share together. Bliss!). When we did move him to his own bed, the ambience of the room remained the same and he seemed to sense that he was in a safe, familiar place. 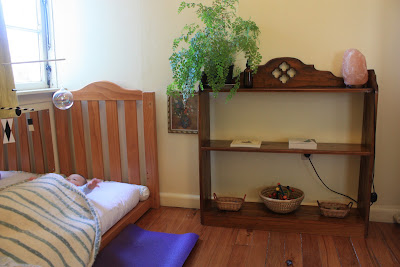